Digital voice keyer (DVK or DVP, digital voice processor) is a mandatory part of SSB contesting.
TS-590's USB audio I/F eliminates the need for an extra analog audio I/F for digital modes and DVK operation, which is a good news. We will be freed from worries like audio isolation, hum etc. However, setting it up is not so straightforward. Here's how.

Preparation
Initially I thought this was enough and I'm ready to go for DVK. PTT can be triggered through CAT. On testing, reception was OK but there was no audio transmission even though PC Audio OUT is correctly set to USB Audio CODEC. Why?

4.2. Setting Transmission Methods for Audio Input to the Rear Terminal


To transmit audio input as audio signals from the USB, select one of the following methods.

● Use the ACC2 Connector’s PKS port to transmit.

This setting allows you to transmit audio received by the rear terminal by setting the PKS port in the ACC2 Connector on the back of the TS-590S to “Low.”

● Use the PF key assigned to the DATA SEND function to transmit.

By assigning the PF key to the DATA SEND function, the PF key can be used to transmit audio received by the rear terminal.

Apparently, Kenwood separated Data PTT from Mic PTT for some reason. I don't know why this was done. As a fail-safe method? And what PKS stands for? PacKet Send, perhaps?

Now I'm not going to use ARCP-590 and the PF key thing is impractical, so we have only one option to choose - PKS keying. However, homebrewing a COM-ACC2(PKS) cable (perhaps with an opto-isolator) only for this purpose and hooking it up using a USB-COM converter is not nice. It will spoil the beauty of single USB connection so much.


Postscript: Ian G3NRW has taught me that each of the two methods of PTT (mic and data) mutes the other audio path, thus to avoid mixing up unwanted audio. This now perfectly makes sense to me.

Keying the PKS
I've found two other options to key the PKS without the need for a dedicated ACC2 cable. You need either one not the both. 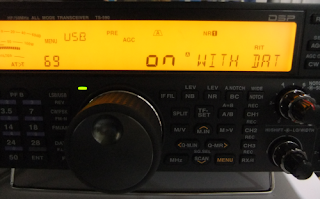 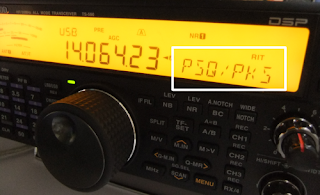 Either way, DON'T trigger the usual (mic) PTT too. It will mute the back port audio (USB/ACC2) even if you use Data VOX or PKS. In most control software, 'PTT via CAT' must be DISABLED.

There is a PC control command that triggers the PKS (data PTT) instead of mic PTT. So if software properly supports this for DVK function, then we can achieve real 'single USB cable DVK'.

Anyway now you are ready to go for DVK. I have tested this with N1MM and TR4W and it worked great!
Posted by rin at 11:47 PM